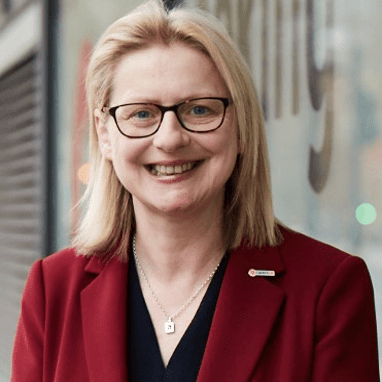 Helen joined Carers UK in December 2018, from the national volunteering charity TimeBank where she was Chief Executive for ten years. Since joining Carers UK she has focussed on ensuring the financial stability and growth of the charity in order to launch an ambitious new strategy in 2021. Helen has been appointed to represent carers on the NHS Assembly, the body brought together to advise NHS England and NHS Improvement on the delivery of the NHS Long Term Plan, as well as the National Institute for Health Research, School for Social Care Research Advisory Board at the LSE.
Her extensive leadership experience and sector knowledge saw her create a well-respected and successful brand at TimeBank, leaving the charity on a secure financial footing. Previously, Helen was Director of Fundraising at the military charity SSAFA and has worked in the voluntary sector for over 25 years. Brought up on the Isle of Man, she studied for a degree and M.Phil at the London School of Economics.