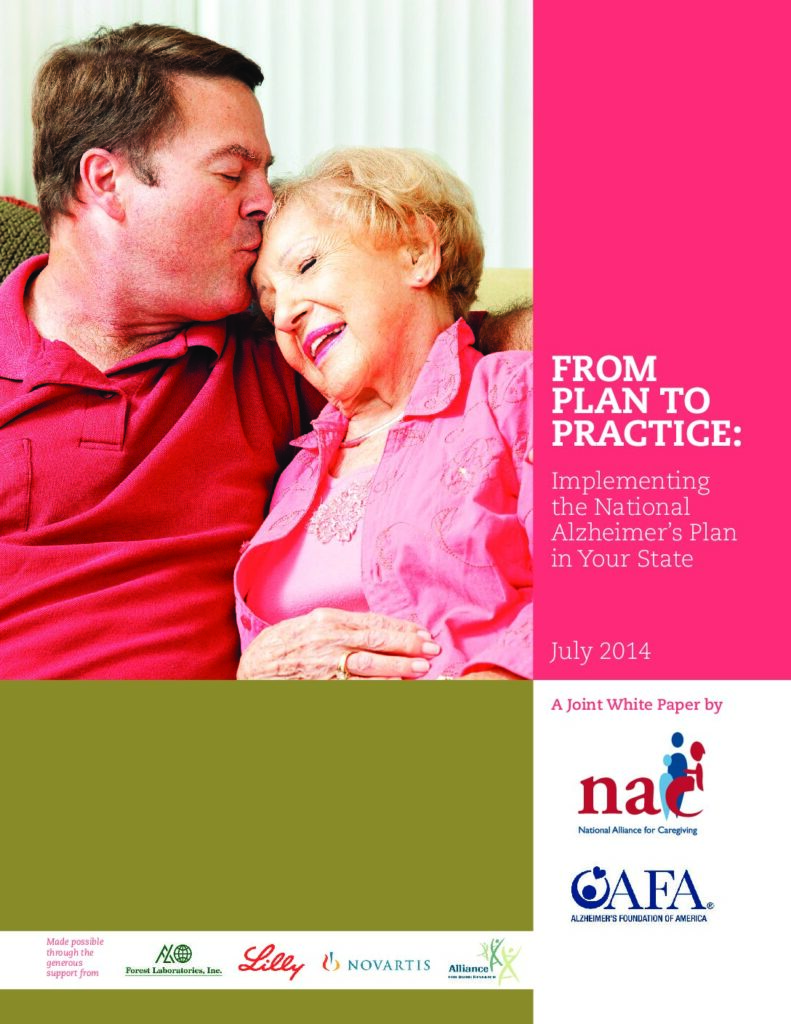 In September 2014, the National Alliance for Caregiving, the Alzheimer’s Foundation of America, and the National Association of Area Agencies on Aging joined together for free webinar on the new white paper, “From Plan to Practice: Implementing the National Alzheimer’s Plan in Your State.” National experts and case study author Donna Walberg of ACT on Alzheimer’s (Minnesota) discussed why states should have a plan, how to implement and evaluate plans, and best practices.

The webinar follows the release of a state guidebook on state Alzheimer’s plans in July 2014 and a December 2013 webcast featuring state and federal experts on state plans. The webinar, report, and original conference were made possible through the generous support of Forest Laboratories, Inc., Eli Lilly, Novartis, and the Alliance for Aging Research.

The white paper outlines recommendations for both new and existing state Alzheimer’s plans; best practices in implementation; and case studies from three states—Indiana, Minnesota and Rhode Island—that have successfully implemented plans. The report follows a half-day webinar conference convened by both organizations late last year that drew over 250 participants from 39 states and the District of Columbia.

“The goal of this white paper is to propel this critical conversation forward among state and local policymakers and advocates,” said Gail Gibson Hunt, NAC’s President and CEO . “Family caregivers play a critical role in supporting families who have Alzheimer’s or dementia. As the number of Americans living with Alzheimer’s continues to grow, the time to build support systems for patients and families is now.”

“Alzheimer’s disease does not discriminate,” said Charles J. Fuschillo, AFA’s Chief Executive Officer and former New York State Senator. “Each and every day, I see the social and economic toll this disease takes on people and their families. It is time for activists, legislators and caregivers to come together and make combatting this disease a priority.”

About Alzheimer’s Foundation of America
The Alzheimer’s Foundation of America, based in New York, is a national non-profit organization that unites more than 1,700 member organizations nationwide with the goal of providing optimal care and services to individuals confronting dementia, and to their caregivers and families. Its services include a toll-free hot line, staffed by licensed clinical social workers; educational materials; a free quarterly magazine for caregivers; and professional training, along with teen- and college student-specific divisions. For more information about AFA, call toll-free 866-232-8484, visit www.alzfdn.org, follow on Twitter or Facebook.

The December 2013 webconference, From Plan to Practice: Implementing NAPA in Your State, featured federal and state policy makers who have developed comprehensive plans to provide supports and services to people with Alzheimer’s disease and their family caregivers. Experts provided tools and strategies on how best to implement these action steps on the state level. We were honored to host this event with the Alzheimer’s Foundation of America.

Many Thanks to Our Program Sponsors: Eli Lilly, Novartis, and the Alliance for Aging Research.

Employers from more than 75 corporations, academic institutions, non-profits and government joined together in September 2014 to launch a new tool to help employers support caregivers while gaining a competitive advantage in the race to attract and retain the best talent. Led by ReACT (Respect A Caregiver’s Time), the coalition of employers hosted a discussion about the leadership role of companies as caregiving needs for loved ones with age-related, chronic conditions rises sharply over the next few decades.

“The Caregiver Experience: A Snapshot of the Caregiver’s Journey” is a graphic depiction of a caregiver’s day. It combines insights, experience and market research from ReACT’s member organizations and visually shows the multitude of tasks, responsibilities, emotions and skills required for the dual role of caregiver and employee. The graphic is intended to engage employers about the needs of employee caregivers and stimulate new approaches to better support caregivers.

It is estimated that of the 44 million unpaid elder caregivers in the U.S., 75 percent are employed. According to the National Alliance for Caregiving and AARP, nearly 70 percent of working caregivers must make workplace accommodations including modifying hours, taking a leave of absence, choosing early retirement or turning down a promotion.

About ReACT
ReACT represents nearly 1 million employees through its membership of more than 40 companies and non-profit organizations. ReACT seeks to create a supportive business environment where the challenges faced by caregivers juggling the demands of both work and caregiving for an adult with a chronic age-related disease are understood and recognized by employers so that employees can better meet their personal and professional responsibilities. Please visit www.respectcaregivers.org for more information.

In August and September of 2014, we partnered with experts from the Eldercare Workforce Alliance, the ReACT Coalition, and the Social Security Administration to lead a 30-day conversation on building a culture of care. Employers, family caregivers, and aging/caregiving professionals joined in our discussion on Twitter and Google+ to learn how to build a caregiver-friendly work environment.

Continue the conversation at twitter.com/#cultureofcare

This webinar describes how to build caregiver-friendly workplace policies in your state. Bringing together caregiving experts and employers from the national ReACT Coalition, the webinar discussed how caregiving advocates can work with employers to raise awareness of the needs facing working family caregivers.

ReACT Employer Toolkit
http://www.aarp.org/react/
The National ReACT (“Respect A Caregiver’s Time”) coalition, in partnership with the National Alliance for Caregiving and others, has created an online resource to support a business environment where the challenges faced by caregivers, juggling the demands of work and caregiving for an adult with a chronic age-related disease, are understood and recognized by employers. The tools available can be used by employers or employees who want to foster a caregiving-friendly workplace.